Junior wing classes in Chandigarh likely to open next week 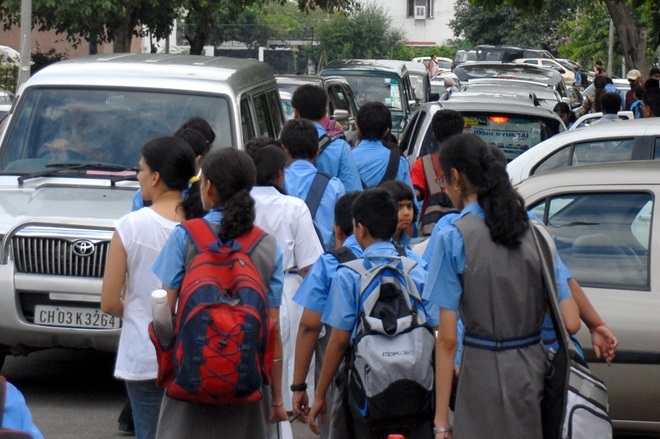 The members of the Independent School Associations (ISA), Chandigarh, recently met the Adviser Dharam Pal and raised the issue of opening junior schools on the pattern of Haryana and Punjab.

“We had met the Adviser and he assured us of taking some decisions in the coming days. Parents are worried about the opening of schools and it will be a relief for them. We thank the Adviser for taking a positive note of our request,” said HS Mamik, president, ISA.

Meanwhile, the private schools have started issuing circular to the parents, stating that the UT Administration is likely to open the schools for all the students of Class 1 to 12 from October 11.

The schools have also started taking consent from parents with regard to transport facilities.

“There is no clarity as of now and no official order has been signed by the competent authority till date,” said a teacher.

“The offline mode of teaching for students above Class 6 has already started. If approved, the junior students can also come to school, but under strict Covid protocol. School managements have to be extra cautious,” said the teacher.

Sources claimed that like previous orders, the UT Education Department would ask the schools to get consent from the parents for sending their children to school.

With a dip in the number of Covid cases, private schools have been demanding to open schools for all age groups.

“The neighbouring states have already opened schools, even for junior classes. I don’t understand what Chandigarh is waiting for. There has to be some clarity as schools have been facing huge losses,” said a member of a school management.

Meanwhile, some parents continue to oppose the move and demand that opening of schools should not be allowed before Covid vaccine for the children.

Junior wing classes in Chandigarh likely to open next week

“The pandemic is not over completely and cases are expected to rise. The government claims to roll out a vaccine for children in the coming months and we should wait for it,” said Vivek, a parent.

“As per media reports, the experts from UT Administration’s Health Department accepted that these two months are extremely crucial and the higher authorities should understand this,” he said.

Some other parents claim that before opening the schools for junior classes, the authorities should take expert views from the UT Health Department doctors.

4 Students of Allen Chandigarh secured under 100 AIR in JEE...