Pressure on CM to call a truce 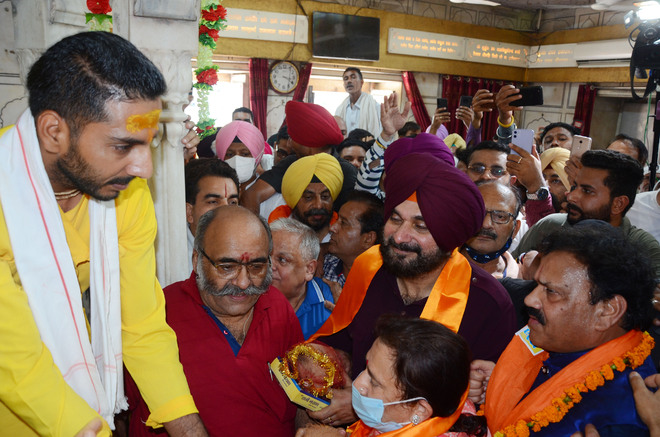 Even though Chief Minister Capt Amarinder Singh intends not to call a truce with newly elected PCC chief Navjot Singh Sidhu until he apologises for his tweets, pressure is mounting on the former to extend an olive branch to the latter.

A majority of the MLAs who gathered at Sidhu’s Amritsar residence echoed the sentiments, terming the CM’s stand not in line with the party high command’s action. Before leaving for the Golden Temple, the MLAs, on the intervention of Punjab affairs in charge Harish Rawat, unanimously decided to send a written request signed by all, including Sidhu, urging the CM to attend the installation ceremony of the new PCC chief.

It was felt that Sidhu’s installation as the state party chief in the absence of the Chief Minister on Friday would send a wrong message. A senior party leader Kuljit Singh Nagra, who has been appointed one of the working presidents, would personally deliver the letter to the CM tomorrow. Rawat, besides some other senior leaders are expected to attend the installation ceremony.

Concerted efforts are on for reconciliation between the two leaders. Some senior leaders, including Lal Singh, Rana KP Singh and Rana Gurmeet Sodhi met the CM today. Since the general mood today in the CM camp was to take the step that was not in defiance of the party’s high command, a senior minister close to the CM has been tasked to reach out to Sidhu.

During the day, the voices of dissent rose against the CM for not calling an unconditional truce.

“If the CM can meet Sukhpal Khaira, who has passed personal and damaging comments against him, and Partap Bajwa, what is the harm in meeting Sidhu,” Cabinet Minister Sukhjinder Randhawa said, reminding the CM that they did not allow the party to split when Bajwa was removed as the PCC chief to make way for Capt Amarinder.

Randhawa said he, along with Tript Bajwa and Sukhbinder Sarkaria, had gone to the house of senior leader Lal Singh to convey that they, along with Sidhu, could walk up to the CM, if he agreed to show a large heart.

Randhawa said instead of giving statement that he would not meet Sidhu till he settled his issue with the CM, Brahm Mohindra should have taken Sidhu along to meet the CM. He claimed Sidhu had even called up Mohindra to make a courtesy call, but the latter said he was not well.
MLA Pargat Singh too questioned the CM’s firm stand on the apology at a time when people are giving a rousing welcome to Sidhu. Minister Tript Rajinder Bajwa said the CM should show a big heart and bury differences with Sidhu.

Meanwhile, party’s state affairs in-charge Harish Rawat, who would attend Sidhu’s installation ceremony, is likely to hold discussions on the selection of other office-bearers of the state body. Poll strategist Prashant Kishor is in touch with the party for chalking out the roadmap for the 2022 Assembly elections.

No harm in meeting Sidhu

“We all want unity and will not allow anyone, even Capt Amarinder Singh, to split the party. If the CM can meet Sukhpal Khaira and Partap Bajwa, what is the harm in meeting Sidhu?” — Sukhjinder Randhawa, Cabinet Minister

“The Chief Minister should show a big heart. He can forget Sidhu’s tweets as he has forgotten the letters and public remarks made against him by Partap Bajwa.” —Tript Rajinder Bajwa, Cabinet Minister

Even CM should apologise

“Why should Sidhu apologise? It is not a public issue. Capt Amarinder has not solved many issues. In that case, he should also apologise to the public.” —Pargat Singh, Jalandhar Cantt MLA

Pressure on CM to call a truce

Differences can be resolved

“Differences prevail in all parties, but these can always be resolved. The high command’s decision (on Sidhu) should be welcomed.” — Amrinder Singh Raja Warring, Gidderbaha MLA

All the welfare bodies of Sector 38 West did plantation collectively, planted many medicinal&fruitful&flowering plants